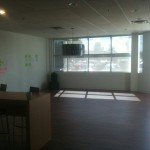 I had one goal in mind when creating this space which was to make it safe for teams retrospect in an environment where not all folks were accepting of doing retrospectives.  As a coach sometimes the best thing to do is back away and let the team figure things out on their own.   I had just finished facilitating a retrospective with a new team and could sense they wanted help improving but the ‘gotta have it all by this date‘ was too strong to influence them to try new things.

In the spirit of trying something new, I decided to just flat out ask them if they wanted me to sit with them for the next sprint and help out with a finger vote.  A few people had 5 fingers up and the rest averaged about 3 fingers.  I asked them again, but this time be honest and don’t worry about offending me.  “I am here to help, if you don’t feel like you can accept help based on the deadline just tell me“, I said.  The folks with 5’s kept the 5’s in the air but the average dropped to 2 fingers.  I thanked them for being honest and kept the door open in case they decided they wanted help later.

I figured creating a retrospective room was a good way for teams like this to experiment on their own in a safe environment. 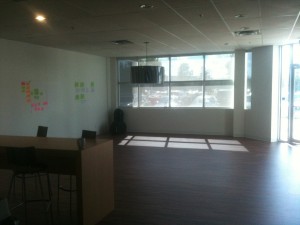 The room is a nice, big open area with lotsa wall space.  It’s also the first thing people on the teams see when they come into the building.  This is near the backdoor entrance that only the team members use.  The point is, there was no need to advertise or tell people to use it.  People naturally came in and looked at the stuff on the walls to see what the hub-bub was about.

What’s in the room: Getting Started with Retrospectives 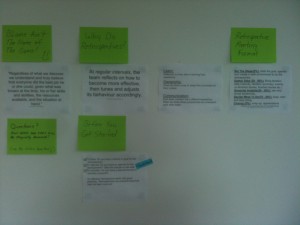 There’s an area that has info on the value of retrospectives, a sample meeting format and a sample checklist of things to do before getting started.   Posted on the papers are:

What’s in the Room: Sample Agenda 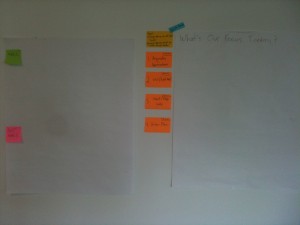 This area is helpful for teams to find a focus for the retrospective.  It’s marked as a sample, not the rule and the sample follows these steps: 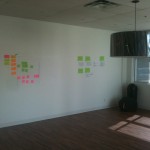 It also happens that there is a kitchen in this area off to the side so it becomes a great conversation piece when I grab my morning coffee.  When talking with folks I can reference the value of retrospectives and use fancy techniques like pointing to Kerth’s Directive to re-enforce the importance of retrospectives.

At the end of the day, it’s about doing anything I can think of to help my client and I love the creative aspect of what I do.  Oddly enough the team that inspired me to create this room has asked for help after that first retrospective.  While the whole team is struggling to accept change, there are a few people on the team that want to improve how they work and hopefully this room has shown them that I want to help while at the same time helping them feel more comfortable and safe about these changes.

Of course, now that the room has been in use for a couple of months it’s time for a refresh, Retrospective Room, Phase II is underway.