I failed Scrum.org’s question about whether or not the Scrum Master is a management position.  I still think it was a trick question, and I did manage a 77% so I guess I’m qualified enough to still talk about Scrum.

The textbook definition of a Scrum Master is someone who “removes impediments” and facilitates the process for the team.  I suppose from a process perspective the Scrum Master does do management type of work but in general terms the Agile community doesn’t agree that the team’s manager makes a good Scrum Master.    The general thinking is that a manager can circumvent team self-organization and creativity by directing the team and in theory this is fine but in practice it’s just not reality for medium to large sized organizations. 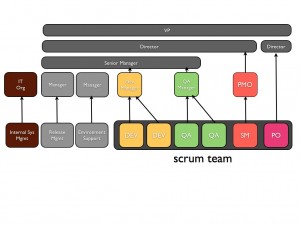 Based on the sessions I attended at Agile Tour Toronto, no one has Enterprise Agile figured out to any degree of certainty and my opinion is that people are focusing on the practices, not changing the system in which those practices are used.

All I’ve figured out so far is that a Scrum Master in a large organization has no power or authority and a smaller sphere of influence to help with change. If you are expecting to hire a bunch of Scrum Masters to make your enterprise Agile, just wire the money you plan to spend on them to any registered charity, it’ll be money much better spent in the end and you’ll get some nice tax breaks.

Let me tell you story about a team I worked on and why we were successful despite the number of constraints on our team:

While this team and project was successful, as a whole, the adoption was not. (sidebar: it’s been 18 months since the adoption started and it’s just now hitting critical mass)  The point is, organizations often think hiring a bunch of Scrum Masters to make their projects ‘Agile’ and yet don’t consider the system is not designed to support Agile processes.  I spent most of my time at this organization acting as an Agile project manager all the while kicking up to influence change.   This organization perceived Scrum Masters as just Agile project managers and didn’t understand that in order to be successful with Agile, the system must change.

Before you decide you need a Scrum Master, take a step back and understand your system and context.  A Scrum Master that reports to a manager who may end up looking incompetent from the visibility Scrum will create, isn’t likely to help remove impediments.  There’s a reason why courage is a value of Scrum, without it you’re just left with a dysfunctional Agile process instead of a dysfunctional…whatever it was before.

(1) For more information about developmental models, check out Michael Spayd’s article on Agile leadership with references to Leadership Agility by Bill Joiner.