Last week I ran a trial run of a session Don Gray and I are working on at XP Toronto.  This session was a result of a session we did at AYE this year about MBTI and corporate culture.

Hypothesis: Is there a way to increase the odds of a successful change by understanding your organization culture from Schneider’s culture model and how the MBTI (temperament and function pairs) of the people involved in the change fit into each of the four culture types.

Here’s how I ran the session:

Here’s a picture of the Schneider culture quadrants and each participants function pairing sticky (click to enlarge): 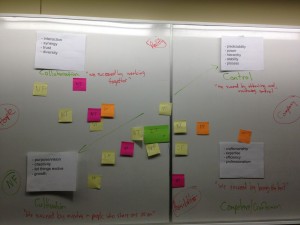 We also mapped temperaments to the Virginia Satir change model and discussed how different temperaments are affected differently by change.  SJ (sensing/judging) want to remain in the status quo to protect the group.  NT’s (Intuitive/Thinking) tend to want to progress through the change as fast as possible and react with more ideas to changes that have yielded no results yet.  SP’s (Sensing/Perceiving) want to move through the change as fast as possible to find the next problem to solve.  NF’s (Intuitive/Feeling) want to make sure everybody is ok while the change is happening.

Combining the Schneider Culture model, MBTI and Virginia Satir change model can be an effective way to create awareness around an organization and it’s people to increase the odds of a successful change.  I’ve often heard the Agile community say things like “change is hard”, “culture is important” and “one-size-agile doesn’t fit all”.  I think the intersection of the these models is the “why” behind those statements.

I want to offer this workshop again to collect more data, if you are interested, please contact me!