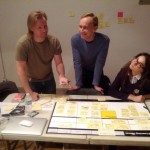 This past weekend I attended Lean Startup Machine in Toronto. I’ve been using this method for a couple of months where I work and this was a great opportunity to get more experience.   I didn’t really know what I was in for but after reading (most of) Eric Ries Lean Startup book, Running Lean and some other online resources I knew I wanted more of whatever this was.

Thursday night after introductions, speeches by the mentors and some exercise to help people to get to know each other, it was pitch time.  I wasn’t really planning on pitching anything, but about half-way through pitches I decided to anyway.  I’m in no way shape or form a salesguy so I’m sure my pitch was pretty lame but mine made the top 15 based on votes from the crowd.  The idea was came from when I was a consultant, I experienced companies that sucked.  They had one other thing in common.  Good people worked there.  My idea was to help figure out how to get exceptional people into companies that didn’t suck using the theory that myself and Don Gray are pitching for Agile 2012.

After some networking, 3 other people joined.  Nikolai Bratkovski, Oleg Melnikov and Lily Samerkhanova.  Nikolai and Oleg co-founded HealthAware.ca and Lily is studying design and architecture.

Here’s the quick version of what Lean Startup is.  Start with a problem hypothesis and figure out a solution hypothesis.  After that, come up with your set of assumptions and identify your riskiest ones.  After that, “get out of the building” and go talk to who you think your customers are.  As you get information you’ll either validate or invalidate your assumptions and you can decide what to do, stay the course or pivot. The key is to validate your customer by getting them to give up something of value.   That can be money or something else of value.

After Thursday night we had already decided to pivot, we figured the original idea was too hard of a problem to solve because it involved helping people overcome fear and software can’t really do that!  I wanted to go ahead with trying out my theory of using MBTI and culture models to match employers/teams with people but it sounded like building a time machine.  That’s something everybody wants but knows isn’t possible.  You’re looking to find a balance between feasibility, desirability and viability. 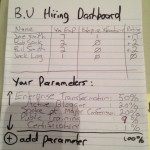 As we interviewed and showed paper prototypes to 20 or so possible customers the idea evolved from finding better jobs for good people to allowing companies to quickly find the best possible candidates quickly and efficiently by some organizing and filtering of applicant information.

On Saturday we got our first paying customers, based on paper prototypes, and an explanation of what our differentiator was.  Saturday night at about 9:45pm Trevor Owens came up to us because he had the problem we were trying to solve.  He offered us $50 to go through 60 resumes and find the 10 best candidates for an Event Coordinator.  I wanted to go home, we’d been there for 11 hours already but the sweat shop started rolling and by midnight we ploughed through 60 resumes and had our top 10.   He called the candidates the next day and If he hires one of them, he owes us another $150! 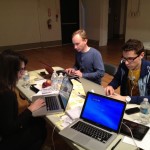 On sunday we fine-tuned our presentation and findings and all the teams presented.  I was completely shocked that we won!  The winning team is the team that executed the method, demonstrated learning and generated evidence to support how they went through the process.  Getting $950 helped too.

Of the many learnings I took away, these 3 stood out the most:

This experience was life changing.  It changed my whole perspective about how I approach problems and ideas.   I used to get annoyed with all the hoopla and tongue-in-cheek “you’re wrong!” snarkyness that comes out of the lean startup community but once you really experience that feeling of validation and invalidation with face-to-face (or phone) conversations with your customers, you will get it.  I get it now.  I “knew it” before, but now I get it.  Really.

Other Notes and Highlights

Alyssa Richard showed how they collected metrics to find out what messaging worked best for RateHub, where people were coming from and what keywords drove the most leads.  She also talked about calling hundreds of brokers in the early days to get off the ground.

Carlo Perez from Uknowa went into a ton of detail about how they organized their site, language tests for landing pages and how it was frightening to call contractors out of the blue to offer them business.  He talked about how he and his team used 30 minutes of their lunch hour at their day jobs to call people.

I want to thank all the sponsors, mentors and attendees, the energy and passion in the room was simply staggering.   Now if you’ll excuse me, I need to get out of the building.