Lowering the Barrier to Getting Session Feedback

While participants in today’s Lean Startup workshop are on break, I decided to create, what I hope, will be a more effective way to get feedback about the session.

My gut says people enjoyed the sessions based on verbal feedback but I still wanted to do some type of experiment because maybe I’m not so good at reminding people about the feedback wall or I’m not really good at explicitly asking for feedback.  I suppose it could be said that I’m not all that good so people are indifferent about giving feedback.  Either way, I wanted to try something new.

My Hypothesis: People are more likely to leave feedback if they don’t have to ‘remember’ to fill it out on their way out of the session on the feedback wall.  Using Net Promotor reduces any barrier to providing feedback because writing a number on a sticky is extremely low effort.

My Experiment:  Use net promotor with an optional comment, put the sticky where they are sitting and ask them to fill it out before the last exercise. 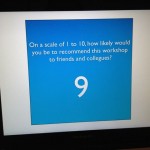 Explicit instructions on the screen 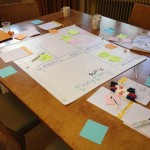 Blue stickies where they sit

Before the wrap-up I asked them to take two minutes and provide feedback.  Comments were optional, I at least wanted to track Net Promotor because I find that to be an effective metric.

I’ll try this again tomorrow and update this post with the results.

I did this again today.  Here are the results:

After I got feedback, I showed the participants my experiment because I wanted to show them that you don’t specifically have to apply “lean startup” to everything at work.  Use data to support decisions you make with your product or service.  I make mental notes about what I change from session to session and am using this feedback as way to see if the changes I’m making are working.  Ideally I’d write this stuff down but since I’m an Agile guy, I don’t believe in documentation.