It’s no surprise that we’re all motivated by different factors.   When I was 20 or so,  I desperately wanted to be web developer.  I remember going to job interviews and being told that I have no experience and I didn’t know what I was talking about because that was too broad of a title.  Door after door was slammed in my face.

I was motivated by curiosity  because I liked solving problems and thought “the web” was the future of work.   Yes, back then the web was relatively new.  You had to install the 128-bit encryption plugin for IE4, and I was learning how to build applications with Cold Fusion.   When IIS4 came out with native ASP support I thought I died and went to heaven!

Status was also a strong motivator for me because at the 60-person global IT call centre I worked at, I was known as “the web guy“, which was totally cool.  I took all of our paper documentation and built an application (with an MS Access backend no less!!) to help call centre agents know how to handle and route incoming support calls.

I was also motivated by money.  Being young and only having worked at Bingo Halls, I was dead-broke.  Making $33,000 a year at that time was like winning the lottery!

Times have changed.  Curiosity and status are still strong motivators for me, and money has been replaced by freedom and relatedness.

But suppose I worked with only people who shared similar motivators?  I think we’d figure out a way to invent problems so we had something to solve and we’d all do whatever the heck we wanted to!

Recently I ran the Moving Motivators game with the sponsoring VP and program lead for an enterprise transformation I’m working on.  We were talking about bringing in Management 3.0 training. 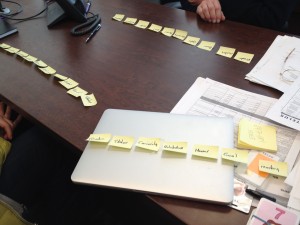 After the game, we decided to run an experiment.  We’d get all the managers and directors to play this game to see if they would want to participate in the course.   We didn’t talk to anyone else on the transformation team, and thought it would be awesome to just do it!

Perhaps this isn’t surprising, but our motivators were similar.  Freedom was high on all of our lists and Order was near the bottom.  We wanted to do it, so we were going to do it!  Screw planning, we love chaos and we’d rather do it now and deal with the consequences later!

After we did the Moving Motivators game, I pointed out the dangers of having too many like-minded people on the same team.  Especially when that team is a transformation team!  We don’t value order but many people do and our quick decision would completely stress out someone who values order and structure.

What the Moving Motivator game allowed us to do was to provoke a conversation about what was important to each other.   Had we not played this game, we’d rely on our assumptions and pre-conceived notions about each other.  They know I’m the ‘fluffy people guy’.  They’re not.   It’s good that we have balance, that natural friction is what makes innovative ideas emerge.

You may have heard the term ‘birds of a feather flock together’.  I see this phenomena often  in organizations.    Someone is labelled as being “difficult” because they challenge the status quo.  Senior leaders bring in colleagues who share similar motivators to avoid conflict.  This phenomena is rampant in the different methodology camps, and not just Agile ones either.  People seek out others that share their motivators and biases and cling to them because it makes them feels good.

The next time you’re struggling with that pesky co-worker who constantly challenges you, try this game out.  I guarantee it’ll provoke a worth-while conversation, and your team will  benefit from achieving a greater understanding of each other.