When I was a kid, 11 or 12 if memory serves, I did a stupid thing with a friend. We lived in a small town of about 500 people so naturally, there wasn’t much to do except ride around town on our bikes and jump in the river.

One night when boredom reached it’s peak, we decided it would be a good idea to smash some kids bike.

And we got caught.

I don’t who ratted us out, but a week later the little girl’s dad called my house berating me for what we had done. He didn’t threaten me, he  asked me if I felt good about what I did. He asked me to imagine his little girl crying because someone stole, and smashed her bike.

I feel subhuman as I write this, especially since this is my “professional” blog.

3 families in our neighbourhood have had their tires slashed recently, and most recently, both the windows of our cars were smashed. It’s infuriating to see how upset my wife is over this. We moved here because Oakville is a safe and quiet place. Our kids are too young to be affected in the same way my wife is, but they do know that ‘some stupid kids’ probably did it. Me? It is what it is. 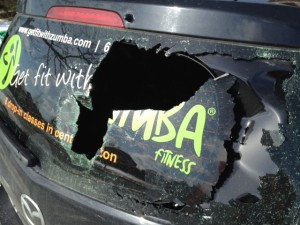 We called the police, but I don’t imagine they’ll go all CSI on the log that is sitting in the back of my hatchback in order to lift DNA off of it. I don’t expect the culprits to be found.

So what should we do? Install cameras? Start a neighbourhood watch? Move? Ask the Town of Oakville to dial up the brightness of our dim streetlights? Ask for increased police patrol? Ask my school to let me speak at an assembly on random vandalism to spread awareness?

Should we blame the parents? Surely, we should blame someone. Surely I should be much more angry than I am, demanding that the Halton Police do something.

Cameras? Sure, I’ll probably get some installed since 3 people on our street have had their cars vandalized over the last month and a bit.

Other than that, I don’t know what the solution is. All I know is when I did what I did to that little girls bike, I was a stupid kid who wanted to feel cool, and to feel accepted by my peers. After I was confronted by her dad, I never did anything like that again. Not because I was scared, but because I knew how wrong it was, and I knew what I had really taken away from that little girl.

I imagine that was my little girl now, and how she would feel. It breaks my heart.

Society is quick to judge and punish wrong-doers, but for me, the guilt was more than enough to teach me a lesson. So to the kids who did this, do you feel cool? Do you understand that my wife doesn’t feel safe about the supposed quiet and safe town we live in? Do you even care? I doubt it.  Was it your intent to make us afraid to live here, or was it simply to get some kicks out of doing something stupid? You’ll get a good laugh, you’ll probably do something like this again, but at some point you’ll grow up and realize how wrong it was and what you really took from us.

While you didn’t take anything physical from our cars after smashing our windows, you took something more precious. If you’re human, you’ll know what that is.

It’ll take time, but we’ll get over it after a few sleepless nights, wondering if it’ll happen again. It’s not the end of the world, there are much worse things happening in the world today than a couple of smashed windows.