Last week I saw an interesting tweet about “resistance to change”

Since “resistance to change” is one of my favourite topics, I had to chime in! Of course that prompted a whole bunch of responses: 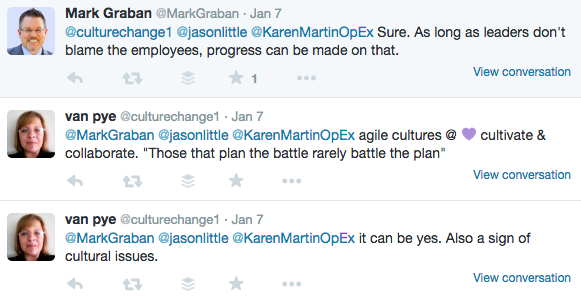 The last four Version One State of Agile Development surveys cited ‘general resistance to change‘ as the #2 reason for why organizations fail to further adopt Agile. It was second only to “inability to change the corporate culture”

Let’s start with how HR defines resistance to change:

Resistance to change can intensify if employees feel that they have been involved in a series of changes that have had insufficient support to gain the anticipated results.

The problem I have with this definition is that it’s from the perspective of the person who is responsible for implementing the change. Suppose you, the change agent, were forced to use a change process you don’t believe in. How would you react? Would you be resistant?

In my view, change resistance is a symptom of a bigger problem. Namely, change agents are given a budget and a schedule to implement a change that management wants…regardless of whether or not it’s the right change to implement.

I don’t believe change resistance is a thing. I believe there is only lack of clarity and vision when a change is forced on people in an organization. Instead of focusing on how to involve people affected by the change into the design of the change, our attention focuses on those pesky resisters and how we can make them stop resisting.

Remember the symptoms of resistance from the article I mentioned earlier?

This is not change resistance. There are 3 things happening here:

In my view, change resistance is nothing more than a catch-all excuse for change agents to use when they have no idea why the change didn’t work. All they know is ‘those people‘ wouldn’t do what I (or the organization) wanted them to do, therefore they resisted change.

So after this long tweet-thread, I side with Mark and Karen. It’s the responsibility of the change agent to do something differently, and that’s not an easy thing to do.

Words matter. Labelling people as ‘resisters’ isn’t helpful and it’s not going to help push our industry forward, especially given how fast things change today. Once we can get past this ridiculous label, we’ll be able to focus on what matters. Meaningful change.