A friend of mine asked me on twitter what my 3 main things I’ve learned teaching my Lean Change Agent workshops and what the main takeaways from attendees were.

It’s a bit hard to answer this in a tweet, or even a serious of tweets, so here goes.

First, How Lean Change Agent Came to Be

About a decade ago I was an innocent bystander in a screaming match between our ‘senior’ agile coach and a senior manager. F-bombs and all. This was my first enterprise agile gig so I figured yelling and swearing at the client and acting like you’re smarter than everybody else in the company was what agile coaching was all about.

While at that gig, another more reasonable coach suggested I go to AYE. I did, and then I wrote this post. Then I created one of the first Live Lessons for Safari Books and InformIT (which is now Front Row Agile) about Agile Transformation.

Then I worked for the organization that the book is based on, wrote the first version in 2012 chapter by chapter on LeanPub and then re-wrote it for Happy Melly Express in 2014.

Torsten Scheller funded the book IndieGogo project, which meant he had the chance to organize the first workshop (which didn’t exist at the time). He brought me to Munich and after 2 workshops, asked if I’d consider licensing the content for other facilitators.

That’s the reader’s digest of my life from 2008 to 2014. The workshop developed over time by practicing what I preach. I used a big-visible wall, perfection game, and net promotor scores after each block of content to see what worked and what didn’t: 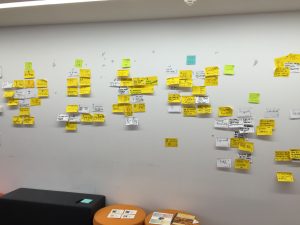 Attendees were asked to rate the content block from 0 to 10, with a comment why they gave it that rating. One person in Hamburg gave the workshop 2 ratings. She said for her (someone with a decade of experience in change, and formal OD or professional coaching training), it was a 4/10. For anyone else, a 9/10. (The sticky note is around here somewhere)

Additionally, I used an actions and insights wall for each content block so attendees could track their lessons throughout the 2-days to eventually come away with their one action they’d try. 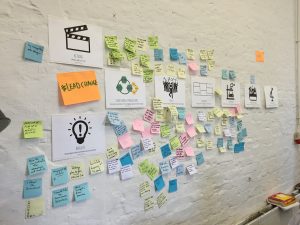 What started with the intent of telling a great story, spawned a global movement:

At every workshop, I ask people to write down their change challenge: 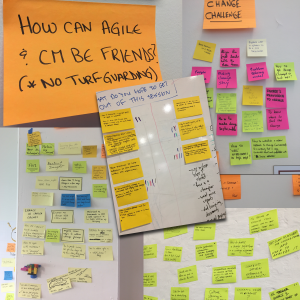 I have 3 years of this data and these are the 2 main patterns:

There are a smattering of others, but generally, the change challenges centre around these topics.

First I’ll show who usually comes, and then what they’re takeaways generally are.

This workshop has generally attracted:

Perhaps most important, experienced change agents who share a similar belief as I get more out of my facilitation style and the stories I tell. That is, they know I am there to help them, challenge them when I need to, pull back when necessary, and they know the workshop is about them, and not me. They usually take that back to their organizations because sometimes we feel forced into push-based change because of the pressure from change sponsors and stakeholders.

Lastly, the small minority who don’t like the workshop (our average global rating from 1000+ online evaluations is 9.01/10.0) don’t like it because they aren’t given a set of instructions for when and how to use which tool, or an overall framework diagram. They are confused about how to start with LCM because in their world, they have to ask permission to use a “different method”, they usually have to present how it works, and they have a lot of baggage to unpack from previous experience, best-practice thinking and more.

Here are a few pictures of Insights people have had:

Jon, this is probably more detail than you were expecting, so hopefully, you (and other readers!) stuck with this post until the end. I wrote it in one sitting, didn’t read it, or change anything so everything just poured out. Hope it was useful!