That was the comment from the manager of a team of coaches I worked with in the past, after he saw the team vision we created. After I attended Management 3.0, I ran an emergent purpose exercise with our team. These were the two images our team drew to represent our vision: 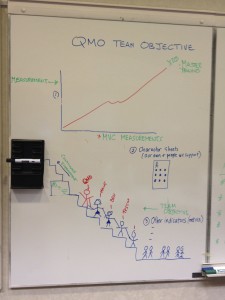 This example represented how we would help people in the organization “climb the steps to agility“. We would know we made progress when we saw people exhibiting the behaviour associated with developing skills in lean and agile practices.

Our other image was a lighthouse: 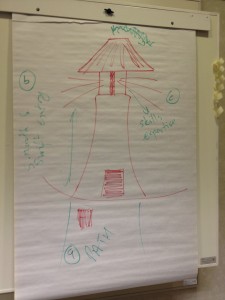 The idea behind this image was that we, the coaching team, were the lighthouse and our job was to ‘light the path‘, or , show the organization how they could use lean and agile practices to reach their goals.

Doesn’t get much more fluffy than that!

The team voted, and the lighthouse won.

Clearly we weren’t aligned with the manager who, the day we were hired, told us that we carried a big stick, and we had to use it!

Lack of alignment comes from a lack of cohesion with the change team. When people on the change team have different interpretations of the urgency for the change, their energy for managing the change will dissipate, and the focus of each change agent on the team can diverge. While having an aligned team isn’t new, The Cohesion Prime from www.theprimes.com explains this quite well.

I guess a simpler way of saying that is if the people on your change team think their way is the right way, and they’re doing whatever the heck they think is right, the change isn’t going to work.

There are a couple of ways to combat this lack of alignment:

For cohesion to happen, the change coalition needs to work at it. That means meeting frequently, retrospecting frequently and, to be frank, calling bullshit on team members when they aren’t sticking to the team agreement!

This is hard to do. I’ve dined on my ego many times, and it’s hard to do, especially when you’re passionate that your way is the right way.