This is an often quoted view of Peter Senge. Unfortunately, many people stop at regurgitating this quote without realizing he also talked about how the conditions in the system manifest the symptom of change resistance in people. This Linked In thread had enough references to this quote to rile me up enough to write this post.

Sure this is a great quote from an incredibly smart person, one who’s teachings I agree with completely.

But what does it mean?

What are they resisting? Resisting feeling stupid because some consultant is telling them they’re doing <whatever thing the consultant is being paid to implement> is wrong?

A while back I posted about my reaction to another company buying the company I was working for. I felt threatened, I was afraid of the un-certainty, and I was real pain in the ass to work with. I’m sure you’ve experienced a similar change in your life.

It irks me to see so many discussions that attempt to put a binary answer on such a complex question.  My question is: Why do people react the way they do to change? And, what can I, as a facilitator of change, do to help?

There are plenty of possibilities to explore the symptoms of resistance:

So, can you imagine having a team with people who have competing preferences trying to make sense of an Agile transformation? How about if you have all crazy people like me (Artisans) keeping the organization in a constant state of chaos?

So what about other models?

Again, more sweeping generalizations, not the rule. Let’s make this more complex and look at how our brains react to change.

If this isn’t enough data yet, consider that we all have different motivators, irrespective of our temperaments. Changes and events in our lives increase and decrease the SCARF motivators.

I value Relatedness and Autonomy more-so than the others, according to the self-assessment.  If the threat response to  those motivators is more powerful than the reward response to the other motivators, I will not be a happy camper, even though my temperament (SP) generally likes change.

Given the belief I’ve attached to that, it’ll trump my temperament and my motivators and the model that explains that, is Chris Argyris’ Ladder of Inference: 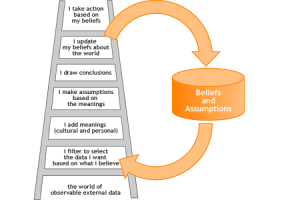 If you’ve stuck with me thus far, you probably have some insights into the symptoms you’ve observed.

What else can possibly make change more complex?

But wait! Lewin’s Un-freeze, Change, Re-freeze model implies everyone is moving through change at the same rate. So does Prosci’s ADKAR with it’s linear approach to change management. How can they work as advertised when there are so many factors that affect how people experience change?

Change is incredibly complex, and there are so many factors, and models, to use that can help you make sense of what you see, and one change process certainly might help as a mental model, but not at a tactical level.

If you’re a facilitator of change, YOU need to understand how to recognize patterns in how people process change while considering their temperaments, their past experiences and what motivates them.

AND you have to recognize that every single person you work with in an organization is unique and are processing change differently.

But most of the time, I’ll get them both in a room and figure out a compromise they can both live with.

This is why you cannot put a budget and schedule on change, there’s no way to “ensure” everyone is progressing through the change at the same rate and same intensity.

Early on in my career I understood none of this. All I knew was that my head was sore from running head-first into a wall far too often trying to push change. Now I realize it isn’t “the other people”, it’s my approach.

Sometimes I need to know when to push, and when to lay off by recognizing symptoms people exhibit when change is introduced.

Of course, that’s my stance based on my experiences, my temperament, motivators, and my own cognitive biases.  Oh yeah, and I didn’t even touch the hundreds of cognitive biases that affect how people respond to change. Maybe another day.