This year at Agile and Beyond was the first Agile event I attended since I presented with Declan Whelan at Agile 2015. I remember someone quite well known tweeting out something to the effect of: “Is this year’s #agile2015 the usual echo chamber?”

Then this year at Agile and Beyond, I had a conversation with someone who self-admittedly is new to the Agile world, more or less. She wanted to know why there is so much fighting between camps. She noticed speakers tend to enforce their beliefs by tearing down the beliefs of others.

The third piece of data that sparked this post was a recent Linked In discussion where a project manager asked a simple question:

This prompted a response you could probably guess without reading any further:

So I chimed in:

To which one of the guilty parties replied:

Hopefully the irony of preaching respect for people while clearly disrespecting the original poster was not lost on this person, and this is someone I know. Sorry dude, I know what your intent was, but this knee-jerk reaction to chastise people new to Agile is rampant.

In the end, the original poster appreciated a few comments from me, and some others:

But, the damage had been done. Shoot first, ask questions later left this person with a bad experience:

Fortunately, other people spoke up about how sad it was to see this exchange:

Hey, I get it, this isn’t the end of the world. Stuff like this happens, and will continue to happen. The best we can do is learn and move on. So when you’re talking to a dumb client, or someone who doesn’t get it, understand where they’re coming from first.

Snarkyness aside, some say Agile has died (https://www.linkedin.com/pulse/agile-dead-matthew-kern). Some think it died more than once (https://www.infoq.com/news/2016/05/agile-dead-again).

I don’t disagree with the points raised in either article, but I don’t think Agile has died. After the manifesto was created, those who got it’just did it. They didn’t need frameworks, or methods, they just did it. The organization I was working in at the time was using daily standups, retrospectives and limiting our WIP. We didn’t know Agile was a thing back then, but the way we worked aligned quite closely to the values and principles.

We designed a system of work that suited the type of work, the variability in the work, and how often things changed.

As the Agile movement emerged, people learned, alliances formed, and a little more structure by way of meet ups, other events, and official certification and training happened. As coalescence progressed, the movement started building more momentum, but still within small pockets of early adopters, and those that ‘got it.’

Then the tipping point happened. People realized they could make shitloads of money off the Agile movement which kicked off the era of bureaucratization. I went through my phase of thinking that was wrong, but then I grew up and realized we live in a globally distributed, free market so if people can make money off something, what’s wrong with that?

As the Agile movement progressed into decline in the eyes of the early adopters who ‘got it’, a new Agile movement began. This movement was led by the framework people, and the “agile project management” people, including PMI. Purists groaned, and labeled anyone selling something as a snake-oil salesman, but still, more and more frameworks, and training and certification emerged though co-optation. That means people applied the same set of thinking, and values, to progressing the movement. That’s a sign the movement is in decline and it’ll eventually die when the market becomes over-saturated. 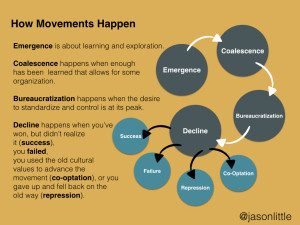 In the city where I live, many people failed over the last 6 – 7 years to build an Agile community, because largely, no one outside of the early adopter crowd gave a shit. Every meet up became the same people talking about the same things. Every conference was the same people talking about the same things. One can only go to a Forming->Norming->Storming->Performing or “Agile Mindset” session so many times before they start throwing up in their mouths a little. Yes, the irony is not lost on me.

Then the industry changed. Well, in my city anyway. The big banks, and insurance companies began going Agile, and voila, a new meet up was born overnight attracting upwards of 150 people without even trying.

Did all of us early adopter practitioners just suck at community building? Of course not. The general population  (or late majority) wasn’t ready yet. This is why you see so many Agile people posting things like:  “BUT I SAID THAT 14 YEARS AGO!!!!! I AM SMARTING THAN EVERYONE!!!!”

That’s the way society functions. People don’t care until they need to. Movements emerge, and die constantly. In the 70’s – 90’s big process was all the rage. Then Agile came along and thinned some of them out. As we realized no, or little process, wasn’t helping move people who didn’t get it along, we started adding more complexity to our processes.

Perhaps we’re back at the state where we were in the 90’s and it’s time to thin things out again.

There is a new movement to take Agile back ( https://www.infoq.com/articles/taking-back-agile ). The innovators and early adopters will say “RIGHT ON!!!” but the problem is, the people who don’t get it are already headed down the path of decline in their own movement, namely, the bureaucratization phase of the original Agile movement. If only we could send John Connor back in time to save himself from the original Terminator before Terminator Genysis showed us that it wouldn’t help because John had already sent himself back at a different time that made all 3 original movies completely fucking irrelevant…..uh…never mind.

Call it complexity, call it complex adaptive systems, call it what you want, but realize no one, outside of us consultants, trainers and coaches give two shits about these ideas.They just want to know why their project manager is an asshole, or why their Agile coach is self-righteous jack-ass, or why the author of this post is a raging egomaniac. There, I offended myself too. Are we friends again? Again, the irony is not lost on me.

Another movement emerging is Joshua Kerievsky’s Modern Agile. He spoke about this at Agile and Beyond, and it was a fantastic talk. People like Joshua are people that just get it. These people know how to navigate complex human systems, know how to explain things simply, and will never had a problem building a business that is adaptable. I know hundreds of people like this, many of which who couldn’t spell Aglie let alone build a model around it.

He was quick to point out that the 4 elements of Modern Agile weren’t frameworks, or tools, or methods, but that is precisely what is going to happen over the next number of years IF enough critical mass is created to move that forward. Someone WILL create process models for each of the 4 dimensions. Someone WILL create step-by-step processes, classes, certifications and more about each of the 4 dimensions.  People WILL argue about why my Modern Agile is better than your Modern Agile. 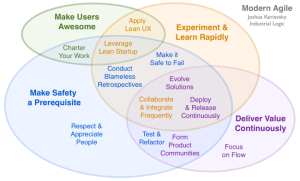 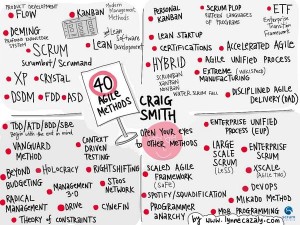 How did 4 simple values, and 12 clear principles evolve into that?

Stuck in the Past

I stopped going to Agile events because over the years I talked with so many people who left completely energized, only to go back into their shitty organization without any idea of what to do next. As the late majority jumps into the original Agile movement, the innovators and early adopters are looking for more advanced ideas, as well as how to redirect the decline of the original Agile movement.

10 years from now, there will be no mention of Agile. Many organizations will have died, many will have adjusted to the disruption in their markets, and new markets will have emerged. There will be new frameworks that help people manage work and people, different camps will continue to attack other camps, and 327 new certifications will be born.

Again, that’s the way society works. People are ready to get Agile, when they are ready to get Agile. I’ve followed collegues into clients who say things like “yeah, our PM is in sprint 1, the team is in sprint 7, and the dev managers are grooming the yak for sprint 2“. It’s unlikely my collegue taught them that, but either way, my job is easier because I’m not the first consultant in! If you get wind of a big consulting firm who’s helping an organizational go Agile, be on the ready. They’ll mess it up entirely, the client will blame them, you’ll be the second (or hopefully third) consultant in there, you’ll say the EXACT SAME THINGS as the previous one or two consulting firms, and the transformation will be a cake walk!

Me? I’m ready to go back to Agile events. I’m sure I’ll still complain from time to time about this mess that is Agile, everyone needs to blow off steam otherwise they’d go insane. The different is, I think I’ve realized my purpose: help people make sense of the ecosystem they find themselves in, and help them think about what options and experiments they can do to be happier. Frameworks, methods, tools, and movements will come and go, but once people realize they always have choice, there’s nothing they can’t accomplish.