The last day at AYE was a full-day workshop on knowing your options when attacking problems.  This session was particularly interesting as all the hosts, sans Jerry, facilitated.  The goal of the session was to give participants the ability to figure out what approach to problem solving might work best in their situations.

In this workshop there were 4 main approaches: Solve, Manage, Cope, Exit.   We were asked to envision a work-related problem and then choose which particular approach we felt we were using by spreading out across the room from Solve to Exit.  Everyone ranked their problems from 1 – 10 with 10 being “holy-ka-smoly I need to fix this now” 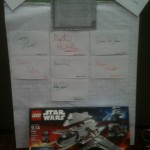 The first half of the session was a simulation where we broke into groups and the hosts gave us a ‘problem’.  Well, actually it wasn’t a problem, it was a goal where we needed to work as a team and deliver ‘the most value’ to our customers who were Star Wars collectors.  Ah, the good ‘ol Lego game.  Steve Smith handed out the boxes of Lego and my first instinct was to do nothing and instead give our collectors an autographed box from the original Star Wars cast.  That seemed like it was have the most value to collectors.  Something neat happened then.  The team LOVED the idea and we had instant buy-in through a unanimous fist-of-five which more or less contributed to our LACK of problems since we dissolved it through solid buy-in.

Other groups that built the model ran into skill problems (some people aren’t good at building Lego), workflow problems (hard to co-ordinate that many people on 1 model) and other issues that collaborating teams typically face.

We did a bit of planning to figure out how to make the display case, get the autographs and print out a certificate at the hotel desk and during our execution everyone volunteered for a task and did it.  As people were coming and going from our main work area, we talked about how the goal was extremely clear and there was never a moment where we questioned each other.  Perhaps it was dumb luck.  Perhaps not.In the afternoon we broke into groups and helped fellow attendees apply the framework to their problems with the goal being to give people multiple options to go back to work with.

What I really enjoyed about this was that it was a chance to learn and practice since for the most part this is pretty much what I do for a living.  During each de-brief I was writing like a madman as so many awesome ideas for attacking problems were talked about.  Most importantly I took away that no matter what the problem is you always have more options than you think.

This led me to believe that problems really just change shape.  You end up managing your gains and losses all the while morphing problems in manageable pieces by either ‘solving’, managing, coping or exiting.  I put parenthesis around ‘solving’ because when you solve a problem (like we did by not doing the work), we just morphed it into another problem.  I’d argue that the problem wasn’t about building the model in the first place, it was about invoking team problems that would serve as the discussion later on.  The artifact is irrelevant.

Most importantly, creativity ruled this workshop and all 3 groups came up with completely different approaches to the exercise and now I have a big pile of notes to sort through!

Thanks to everyone who participated and to our hosts who gave willingly of themselves and their knowledge, I’m looking forward to PSL in May!