Playing Get Kanban with an Experienced Team

One of my most popular posts is “Kanban Isn’t the Point” where I wrote about the four stages of competence and how people may flow through the stages with respect to learning Kanban.

Recently I had the opportunity to run the Get Kanban game with an experienced team that has been using Kanban for quite some time and it was interesting to hear the different types of discussions that were generated compared to when I’ve run the game with people new to Kanban.  Shocking, I know.

At one point in the game, (spoiler alert!!) a situation happens that is designed to have work pile up with the testing team and the whole system grinds to a halt.  Poor testers, always getting beaten.  Anyway, how did the experienced team respond compared to in-experienced teams?

The Response from People In-Experienced with Kanban

– aaaaahhhhh!  look at all the work!!! This isn’t fair!!!! no way!!!!  The response gets worse when the next event happens that makes the situation worse!

The Response from this Experienced Team

– no problem.  The response was the same when the other event happened too. 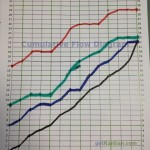 The difference between the two teams is that as soon as the game started, the experienced team looked at the work on the board, the amount of effort required for testing on ALL the cards on the board and the fact that there are only 2 dice (therefore 2 testers) in the testing column, they immediately saw a bottleneck forming and exploited it.

They were focused on flow.  Notice the CFD, you can see they quickly adjusted to focusing on testing right away (the lagging indicator is where the green line goes flat on the left side of the chart).  The black line (delivered stories) is almost perfectly parallel which shows consistant value delivery.  There are no signs of problems due to the 2 testing events because of how the work was managed. 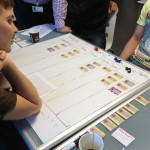 The board when the ‘Carlos’ factor kicked in

The teams new to Kanban are focused on maximizing the work in progress because the theory is that the more you work on, the more you get done.

To be clear, I’m not picking on new people who play the game.  The point is, when adopting any new process the only thing that is going to help people and teams adjust to using it effectively is time.

Over time, experience teaches people how to “see” when looking at a Kanban board.   The reaction to a Kanban board changes from “wow, a wall with sticky notes” to “holy shit!! there is NO WAY we’re going to get all that done!!”

It’s important to remember the 4 stages of competence when bringing change into your organization because progress is going to grind to a halt (or slow considerably) no matter what you do.  Chaotic systems are unpredictable and change brings chaos.   Experience is built by living through the pain of chaos through to integration of the transforming idea into the new status quo.  It’s a natural change process and in order to progress through the 4 stages of competence all you need it time.